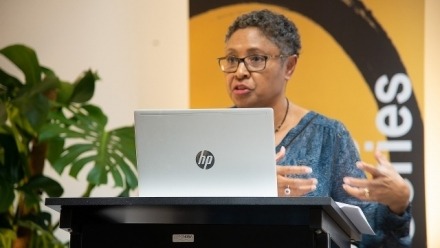 In May, Dr Leah Lui-Chivizhe presented the first talk of the First Nations Speaker Series, a collaboration between GML Heritage and the ANU Research Centre for Deep History. In this talk, she engaged with some of the challenges of working with collections gathered during colonisation—specifically ancestral remains—and the unresolved issues this creates for First Nations people.

In 1875, William John Macleay visited Erub, in the Torres Strait, as leader of the Chevert expedition. His relatively short voyage, lasting less than five months with approximately 60 days of collecting, yielded an astonishing amount: he brought thousands of natural history specimens back with him. The expedition spent only two weeks in Erub, where they dredged for sea life, including shells, fish, and coral, collected about 100 cultural objects including a turtle shell mask, and also, most disturbingly, collected human materials. This included the mummified body of a man, and thirteen human skulls.

Read the full article on the Research Centre for Deep History website.