Works that Shaped the World: Maria Nugent talks about the "Gweagal" Shield 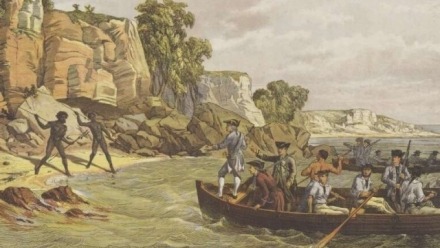 Violence marred the encounter between the British and Gweagal at Kamay (Botany Bay) in 1770. Approaching the shore, Lieutenant James Cook shot at two indigenous men. Although wounded, one man went to retrieve a shield to defend himself. By the time he returned, the sailors had scrambled ashore.

Two hundred years later, around Cook’s 1970 bicentenary, an undocumented shield fitting this description was located in the British Museum. Since then, it has been mobilised for various kinds of public storytelling – exhibitions, radio programs, journalism, documentaries, repatriation claims, and books -- about the 1770 encounter and its legacies. Recently, though, its provenance as that shield, the one used defensively against Cook, has been questioned.

This lecture retraces the shield’s story—teasing out its meanings in the original encounter in 1770 and the trajectories of its material analogue entangled in the fraught politics of that encounter’s history and symbolism. As silent witnesses to historical events, objects carry considerable power and can provide new historical insights. But what happens when their claim to “being there” falters? What worlds do they shape then? And why do some objects, like the ‘Gweagal’ shield, become “sticky” while others, like the well-provenanced spears that Cook confiscated as part of the same ‘foundational’ encounter, attract far less public attention?

Maria Nugent is Professor and Co-Director of the Australian Centre for Indigenous History and Senior Fellow in the School of History at ANU. She has written extensively on the encounters at Botany Bay in 1770, including two books: Captain Cook Was Here (Cambridge University Press, 2009) and Botany Bay: Where Histories Meet (Allen & Unwin, 2005). Her article (with Dr Gaye Sculthorpe) on the shield in the British Museum appeared in Australian Historical Studies in 2019. With the British Museum, the Museum of Archaeology and Anthropology Cambridge and Aboriginal communities, she is about to commence a large ARC-funded project mobilising objects from Sydney and coastal areas in British and European collections to produce new cross-cultural material histories of the colonial city and its hinterlands.

A recording of the talk is available here.